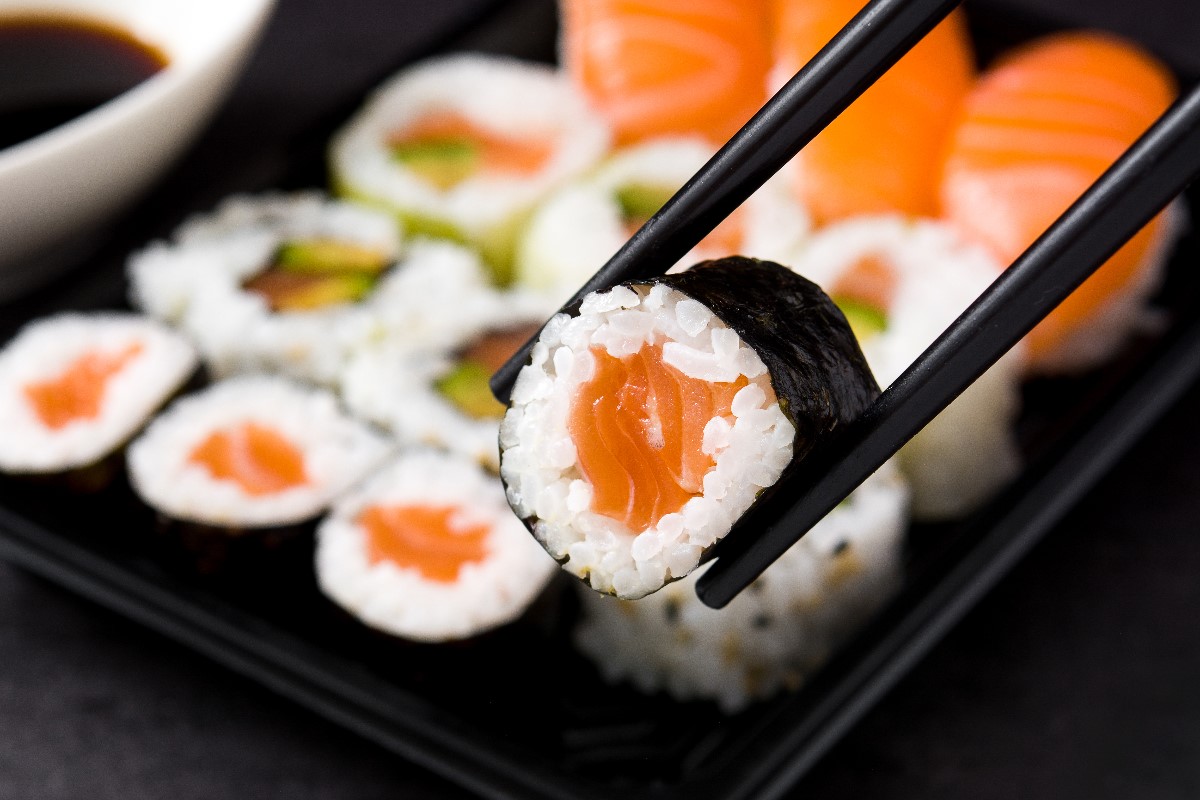 Sushi has been known in Asia for centuries. It used to be a traditional Asian dish, but originally it was different from the one we know today. Modern sushi was created 200 years ago. We are talking about round discs filled with cooked rice, seasoned with rice vinegar and usually served with spicy wasabi and pickled ginger. Is it really healthy?

Sushi became popular in the 17th century. Initially it was a way to safely store fish. The caught and cleaned fish was pressed between rice and salt and then left to ferment. The process took several weeks. After that, the fish was ready to eat. The recipe then evolved. Vinegar began to be added to the raw fish, which greatly accelerated the fermentation of the meat. It was not until the 19th century that fermentation was abandoned and raw meat was put between rice and seaweed. This was the beginning of sushi as we know it today. With time various additives started to be added to raw fish and rice, such as vegetables, wasabi or soya oil. Today, many types of sushi are known, which do not end with just round snacks wrapped in seaweed with raw fish inside

>> See: What instead of potatoes for dinner? A few ideas

What nutritional values does sushi have?

Sushi is considered a healthy, tasty and easy to digest dish. All this is due to the ingredients it consists of. Is this really the case? We should remember that a lot depends on the quality of the products used to make sushi. Sushi is generally considered healthy because fish, rice and vegetables are rich in vitamins and microelements. Let us take a closer look at what should be in sushi.

Fresh fish are a very good source of protein, iodine, omega-3 and omega-6 acids, selenium, vitamin D and B vitamins. Eating fish has a positive effect on brain function, immunity, and also reduces the risk of cardiovascular disease

Rice is too valuable a source of carbohydrates. Unfortunately, in the case of sushi, this ingredient is almost completely refined and devoid of any vitamins and minerals. Unfortunately, but simple sugars do not have a positive effect on our health. Almost immediately after consumption they increase the sugar level in the body. Moreover, they can cause inflammation and increase the risk of diabetes

Seaweed is used to wrap sushi. They have a lot of nutritional value, but keep in mind that there is very little of it in one roll. They are a rich source of protein – they are composed of it in about 40%. They also contain calcium, magnesium, phosphorus, iron, sodium, thiamine, and vitamins A, C, and E. Nori contains ingredients that help fight disease, inflammation, or cancer. Unfortunately, the amount of seaweed in sushi is too small to feel its beneficial effects

Ginger is a source of potassium, magnesium, copper and manganese. It helps fight viral and bacterial diseases. It fights nausea, muscle and joint pains. Its regular consumption can lower the level of LDL cholesterol

Sushi – healthy or not?

Sushi contains many nutrients, but not all of them have a positive effect on our body. The main component of the rolls is white rice, which consists of simple carbohydrates. They quickly raise the level of sugar in the blood, but in sushi rice vinegar is used, one of its actions is to lower sugar levels. Rolls contain a very high amount of sodium. Moreover, its popular side dishes like smoked fish and pickled vegetables are also high in it. Excess sodium raises blood pressure and retains water in the body. Sodium irritates the gastric mucosa, which in turn leads to cancer of the digestive system. Note that fresh fish can be contaminated with various bacteria and also contain heavy metals and toxins.

Previous Posts Is it worth buying a planetary robot?
Next Posts Home beauty treatments you can do yourself