How to eat sushi? How to handle chopsticks? 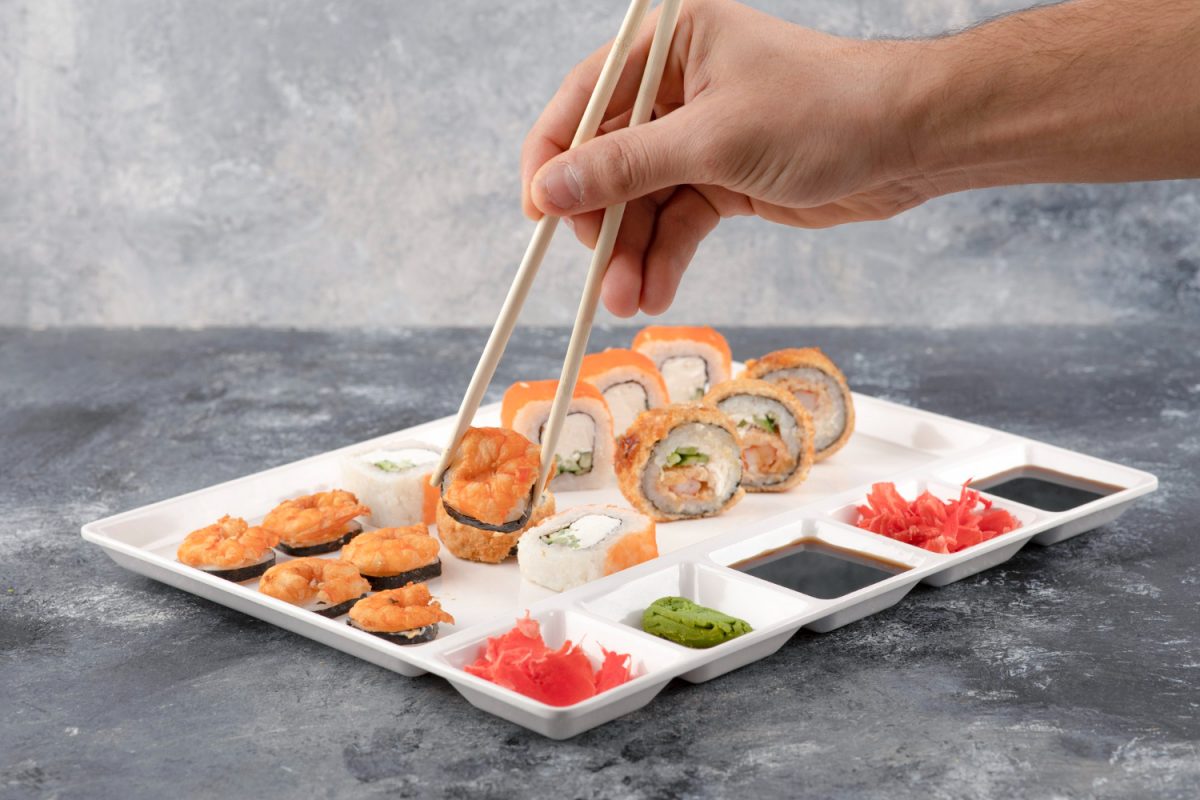 Hobby
You need about 4 minutes to read this post

Sushi is a traditional Japanese dish which has conquered the hearts of gourmets in Poland and all over the world. If you have not yet had the pleasure of trying this speciality, and do not want to make a faux pas during a business lunch or a date, check out our guide!

What is sushi, and how to choose a dish for yourself

Sushi is an oriental dish consisting of rice and various seafood. This dish is traditionally served with Japanese horseradish, or wasabi, salty soy sauce and pickled ginger. In the Far East the dish is eaten with chopsticks. However, it is not an easy art and it requires practice.

To make it easier, sushi is served in the form of small pieces whose shape makes it possible to catch them between two chop sticks. Besides, this form makes it easier to eat, as such a small piece can be eaten in one bite and in an elegant way. Before placing the sushi in the mouth, it is dipped in soy sauce or wasabi. They can, of course, be combined with each other. To change the taste before tasting another type of sushi, one chews on ginger, which is excellent for cleansing the taste buds.

In the Land of the Cherry Blossom, sushi is simply “sourdough rice.” You can get many variations of this traditional dish at a restaurant. It is usually a combination of rice, seaweed and seafood. Here are the most common ones:

Using chopsticks while eating Japanese dishes is well received. Therefore it is worthwhile to master this art. It is best to practice at home as the beginnings may be difficult. There are also chopsticks for children which are connected with each other by a rubber band – they can be used for learning by adults as well.

Here are the basic rules: hold the upper baton with your middle finger, index finger and thumb. Place the second baton between the base of your thumb and palm. Only the upper stick is movable and it is with the help of this stick that pieces of sushi are caught

The second one is used to hold the sushi. It is worth knowing that in Japan you should not hold chopsticks with five fingers. It is seen as a big discourtesy.

Learn about the history of chopsticks

Although the exact origin of chopsticks is unknown, it is certain that they were used as early as the Shang dynasty, which ruled in China since about 1766 BC. Eating with chopsticks is associated with Asian cuisine. Today, this method of eating can be found all over the world. Traditional Japanese alcohol, sake, is usually added to sushi.

Differences between Japanese and Chinese chopsticks

Japanese chopsticks are made of lacquered bamboo or wood, while the Chinese counterpart is produced from ground raw materials. In China, there are two sizes of chopsticks – 26 cm for adults and shorter ones for children. In Japan, there is only one size for everyone and these are 23 cm. In Chinese chopsticks the end is beveled, and in Japanese chopsticks it is sharpened.

Such knowledge can come in handy for a conversation at a dinner where sushi is served.

The knowledge of how to eat this dish may be useful in many situations, as it is one of the most popular dishes in the world.

Previous Posts Organic food - how to recognize it?
Next Posts Does hybrid damage my nails?